It is said that a function $$f(x)$$ is convex if, once having joined any two points of the graph, the segment stays over the graph:

In this graph we can observe different segments (with different colors) that join two points of the graph and stay over it.

An example of a non convex function is:

since we find segments that join two points of the graph and that are below it.

On the other hand, it is said that a function $$f(x)$$ is concave if the function $$-f(x)$$ is convex, or in other words, if the segments that join the points of the graph $$f(x)$$ are all placed below the graph. 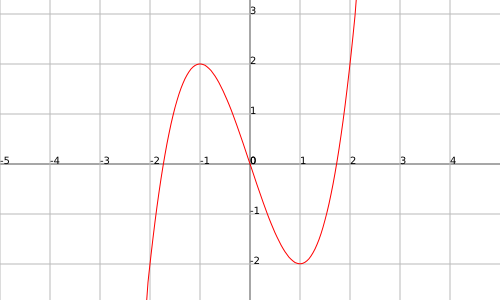 The study of the concavity and convexity is done using the inflection points.

An inflection point is defined as the point in which the function changes from being convex to concave or vice versa.

We can see in the previous example that in the point $$x=0$$ (in the coordinates origin) the function changes from being concave to convex. Therefore we say that $$x=0$$ is an inflection point.

We are going to illustrate the process with an example in order to give a simple and clear explanation:

We can already calculate the maximums and the minimums of the function $$f(x)$$ using the first derivative. The expression of this one is $$f'(x)=3x^2-3$$ and we find maximum and minimum in $$x=-14$$ and $$x=1$$. respectively. If we represent the graph of the derivative we have:

We observe that exactly where the derivative has a minimum is where the function has the inflection point.

To find the point from which we are going to derive the derivative function and equal it to zero: $$$f''(x)=6x \Rightarrow 6x=0 \Rightarrow x=0$$$ and consequently the original function has an inflection point in $$x=0$$.

Solved problems of concavity and convexity, inflection points of a function